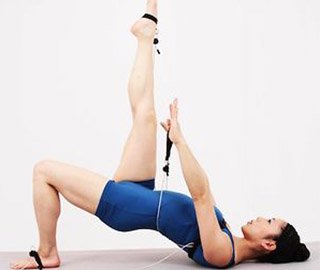 I don’t sell this or get anything for talking about it. I just love it!

This new device know as the Tye4 was invented by Joan Breibart, founder of the Physical Mind Institute.

It provides resistance to all parts of the body during any kind of movement. Here’s a nice review of this prop by Pilates instructor, Michele Hoyos. 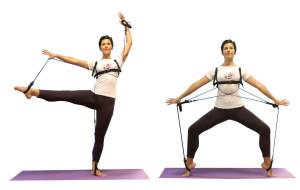 Now that TYE4® is on Pilates Anytime and getting recognized, I am reminded of how long it took for Pilates to get anywhere.  My personal Pilates story began in the early 70s in Los Angeles where I was studying for my Masters in Dance Education.  I was invited to an invitation only ballet class that was 90 minutes. The last 30 minutes was matwork and I don’t remember if it was described as Pilates, but I later learned that the teacher had studied with Ron Fletcher. This was at a studio somewhere near Hollywood and Vine. I went there regularly and did the class and loved the moves, not thinking much about where they came from. Other students seemed to be less impressed. Of course, the exercise biz was just in its infancy, we were all neophytes so we couldn’t make comparisons. Jazzercise was just beginning, but by the early 80s Jane Fonda’s stretching, toning and dance aerobic steps seemed like the answer to everyone’s body prayers!

Finally, years later when I was living in Texas in the late 90s I met Ron Fletcher himself and became a client. This time, the word Pilates was known.  Even then, few could articulate what made Pilates special.

The Institute for the Pilates Method started in 1991 and made some gains in educating the public and the fitness world, but it wasn’t until 2001 after the trademark had been liberated (10/19/2000) that Pilates took off.  The rest, as they say, is history. Not only did Pilates  become the “new” great thing, it led to a much deeper understanding of how   bodies work and how to train them correctly.

For the past two years, I have been teaching a Tye4® Fusion class at Columbia Athletic Club in Sammamish, Washington.  Over this time I have made observations that I find perplexing.   The same teachers who benefited from hundreds of Pilates workshops/classes exploring assistance and resistance and oppositional movement, haven’t quite gotten why Tye4® is the essence of this type of movement.  I don’t know if it is fear of the unfamiliar, being a purist, or just laziness. It always amazes me when I get a new student in my class who totally gets it, yet someone who has been teaching mat for years can’t figure it out.  I have had new students make astute observations on how Tye4® gives the support, reminds them to breathe, and connects them with their center. Pilates instructors who are constantly reminding students of these things, don’t see how Tye4® works.  This is a mystery to me but then I have to remember that many people who today love Pilates didn’t “get it” for decades.

I guess time is the answer to the mystery.  I am glad I discovered Pilates early and Tye4® too.  The latter is a litmus test for the former so get ready to experience a really great tool and  your clients will be thanking you too.

I highly recommend it! For more about it go here.
Start Your FREE Award-Winning Online Pilates Lessons With One of Today's Leading Instructors!