Setting the Record Straight About 4 Common Misconceptions About Pilates 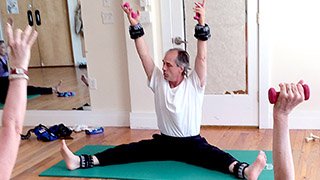 Despite the fact that Pilates has been around for nearly 100 years, several misconceptions remain among a surprising number of people. This brief article puts these myths to rest once and for all! Luckily, these misunderstandings don’t seem to effect the growing popularity of Pilates worldwide.

This is an excellent article by one of the leading instructors of Pilates – he’s been teaching for 40 years. His perspective is authoritative and nicely stated. I’ve reprinted several of his provocative points of view in previous posts. You’ll enjoy this.

It’s understandable why this myth has taken hold. Class participants are mostly women. So are instructors and Pilates gym owners. But a closer look at the Pilates world reveals that though Pilates attracts more women, women are not the focus. In fact, at the pro sports level there are probably more men than women since it’s an important part of the conditioning program for football, baseball, basketball, golf and hockey players.

“Since I’ve done Pilates, I’m much better looking and 4 feet taller,” says Rich Beem, 2002 PGA Champion. “Seriously, I’m now so stretched out and have such great posture that I look and feel like a different person.”

And after all, it was founded by Joseph Pilates who maintained a strong body right up until shortly before his death in his 80’s!

Myth #2 – Pilates Is Not Hard Enough

Initially, many men find it difficult to see a rigorous workout in a routine that primarily uses springs or one’s own body instead of heavy weights. Perhaps it’s the apparent ease of the fluid and controlled movement so prominent in Pilates and rarely seen in other exercise techniques. Indeed, Pilates is unlike anything you’ve ever done or seen before.

It looks deceptively easy, but it’s a completely different exercise routine with completely different results. When I was first introduced to Pilates my preferred exercise was full-contact kick boxing. At first I just couldn’t understand how Pilates could ever give me a good workout. At the same time I was shocked to discover that even though I was in great shape, I was unable to perform many Pilates exercises because I simply had very little core strength. In fact, Pilates is the ONLY exercise program that focuses upon strengthening certain muscles in the core, especially the transverse abdominals, iliopsoas and inner obliques.

My experience is not unusual. Here’s what happened to Kurt Schilling when he started Pilates. “The first three weeks I was really disappointed. I wasn’t sweating. I wasn’t winded, which is what I associate with true exercise. Then in the fourth week I started to understand the Pilates terminology, the idea of working from your center. By the third month I was more powerful and flexible than ever before. And I’d lost 15 pounds.”